Potential Sites of the Battles on Days One and Two

The actual battlefield sites of the 23rd and 24th June 1314 have to be the most hotly debated issue of the Battle of Bannockburn. The descriptions in the contemporary chronicles are easy to interpret in a number of ways, and that is exactly what modern historians have done. Only a few seemed to have actually walked the ground, so to speak, and I must admit, it is their conclusions that have me most convinced. First though, it may be helpful to understand the layout of the land area involved.

Of course we cannot be certain that the terrain was anything like it is today: streams may have altered their courses and woods may have come and gone. But it is fair to say that most of the elements of topography present in June 1314 are still similar enough today to provide us with a good idea.

As you can see from the map, Stirling castle is at the top and the Roman road where Edward II marched northwards comes in at the bottom. In between is the area that interests us most. The Roman road emerges from Tor Wood and crosses some cultivated land before crossing the Bannockburn and entering New Park, a hunting ground. At the beginning of the New Park and overlooking the Roman road is a rise in the ground, on top of which once stood the Borestone. This is where Bruce first held his ground against the English and where he may have had his camp. Also just across the Bannockburn, to the left of the Roman road and below the rise is a bog – The Whins of Milton.

To the east of the New Park stood a cultivated area of land known as the Dryfield, and just behind that, Balquhiderock Wood. This wood covers a steep scarp dropping about 75 feet in 300 yards to a flat plain below known as the Carse of Balquhiderock. The Carse is an area bounded by the Bannockburn, a deep stream with steep banks and the smaller Pelstream. The Bannockburn feeds into the mighty River Forth a little way to the north. The Carse was described by almost all chroniclers as a fairly boggy place with small pools dotted about all over it (the polles, often interpreted as sluggish streams but there is far more evidence on the landscape for pools of water). There are also places of high ground here and there, as suggested by the pattern of the streams, although today, misleadingly, there is also one very good piece of high ground that is actually mining waste!

Leaving the Carse behind and heading back to the Roman road, past New Park it passes through a small habitation with a kirk – that of St Ninians. At this point is an intersection with another, local road, known as ‘The Way’ which drops down and runs along the scarp line at the base of Balquhiderock wood before crossing the Bannockburn further south. All around are small areas of habitation, little hamlets and mills.

Battle site of Day One

It is far easier to locate the area of the first clash between Bruce’s men and those of the vanguard. From the chronicles, and recent archaeology, it is known that Bruce was waiting for the English just the other side of the Bannockburn, his vantage point being at the Borestone. We also know that the vanguard crossed the Bannockburn upon seeing Bruce’s troops waiting for them. Bruce had already prepared the ground with pits either side of the road so the cavalry were pushed together in a narrow formation as they rushed forward. Some historians have had difficulties with this as they have assumed that, because the New Park was a hunting forest, it was full of trees, making it ideal for ambushes, but not for the Scots to be in the open. However, this is an incorrect assumption: in medieval terminology a ‘forest’ could have not only trees, but also stretches of heathland and moor. In all likelihood, although most of it may have been wooded, the area around the entrance and the Borestone may have been clear. Hence, after reading several accounts and analyses, as well as seeing some of the archaeology, I conclude that the first clash was where I have indicated on the map below. 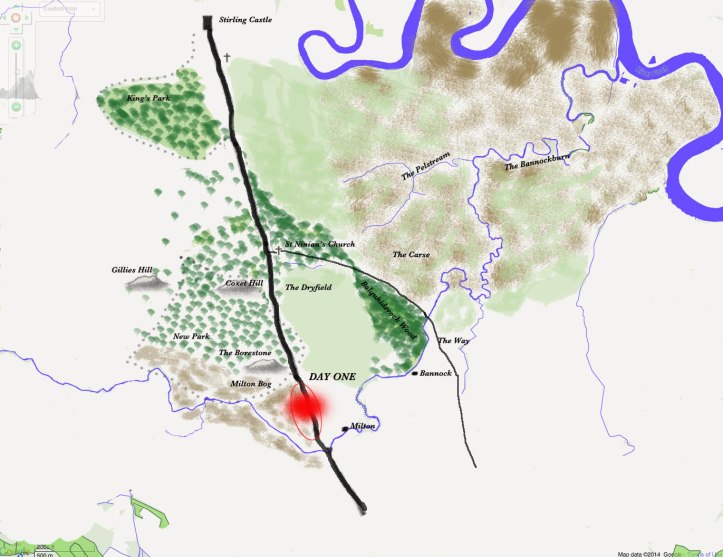 When it comes to where everything was happening on the 24th, there are really only two contenders that need to be looked at: the Dryfield and the Carse of Balquhiderock.

The case for the Dryfield

A popular choice for most historians, including G.W.S. Barrow, author of the wonderful Robert Bruce. Most of the reasoning for the Dryfield site rests on the assumption that Edward II would not have charged his cavalry (even for a short distance) over a boggy field; the Dryfield presents perfect ground for cavalry to operate. The Brus describes the battleground as being ‘the hard ground’ and that the Scots came out of the trees. Historians such as Barrow, Thomas Miller and R.A. Carruthers have all interpreted this as the hard field being the Dryfield and the woods being those of the New Park.

The case for the Carse

Recent studies by archaeologists (such as shown on BBC Scotland – The Quest for Bannockburn, June 2014) and maverick historians such as William Scott have put forward some very convincing arguments for the battle taking place on the Carse. This is because of several factors: 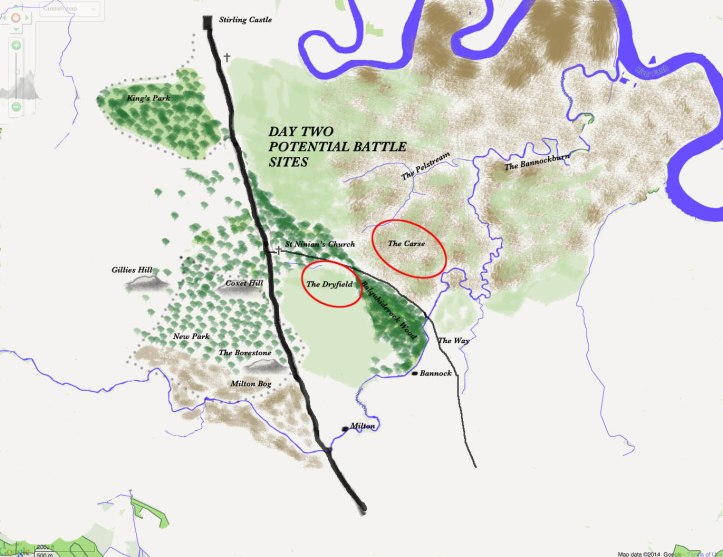 These reasons, then, are why I , after lots of reading and watching documentaries, favour the Carse site as the Battlefield of Day Two. Below are some of the finds from the battle from the recent BBC dig and programme – The Quest for Bannockburn. They were all found on the Carse.