11 Castles With a Link to Hugh Despenser 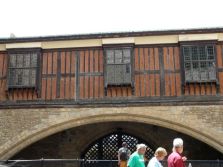 Although Hugh Despenser would have spent time at all of the royal palaces, there are records that actually describe his apartments at the Tower, something not seen elsewhere. The National Archives hold a manuscript (E 101 467/8 m8) that shows that in 1324, Edward II used the hall and chamber above the Water Gate, (later called Traitor’s Gate by historians) as lodgings for Hugh. When you bear in mind that Edward I had originally built these rooms for himself (although he rarely stayed there), it shows just how high in Edward’s standing Hugh was.  The main chamber has now been given a bit of a makeover to show what it may have looked like in the time of Edward I.

This now non-existent palace (previously a manor) has a link with Hugh through his wife, Eleanor.  In 1325 Edward II installed Eleanor Despenser at Sheen. Why, is unknown, but it was probably to do with her confinement with her ninth or tenth baby). On the night of Dec 2nd 1325 when Eleanor was heavily pregnant, Edward and eight attendants rowed there from Westminster, with Edward actually rowing one of the boats himself. Once there he gave his niece a hundred marks as a gift before returning to Westminster the same night. Just two days later she gave birth. Sadly we do not know to which child, but it may have been Elizabeth, her last. She was still at Sheen on 1st January when Edward (who was 100 miles away at the time) gave her a palfrey with saddle and a groom for a New Year’s gift. There were other visits to Eleanor by Edward at Sheen too, most notably staying there from the 12th to the 18th October 1325 while Hugh himself was in Wales.

Note: Sheen was rebuilt as Richmond Palace by Henry VIII and nothing of the original building remains (and only a few bits of Henry’s castle can be seen today also). Hence for this palace there are, sadly, no pictures. You’ll just have to use your imagination.

The incident between Lady Badlesmere and Queen Isabella at this castle in October 1321 sparked off the  war between the crown and the Contrariants in 1321/1322, culminating with Edward’s victory over his opponents at the Battle of Boroughbridge in March 1322. Prior to this, in August, Hugh Despenser the younger and his father had been exiled by the Contrariant earls and barons, led by the earl of Lancaster.  However Hugh did not comply, became a pirate, under the protection of the Cinque Ports, and met or communicated frequently with Edward II during that time. It is very possible that he came up with the plan to have Isabella demand entry to the castle, knowing that lady Badlesmere, wife of one of the latest recruits to the Contrariant side would most likely refuse. In any case, the rebels’ defeat in March 1322 meant that both Despensers were recalled and revenge was taken on those who had called for their exile.

It was here that Hugh Despenser and Robert Baldock, the Chancellor imprisoned 24 merchants from Winchester until they agreed to buy a certain quantity of wine which, it turned out in the end, had gone off rather badly. So say some entries in the Close Rolls dated May 5th 1327, after Hugh Despenser’s execution. Although many claims against the Despensers post-mortem cannot be proven to be valid, I suspect that this one may be true, although unfortunately we will never know the full facts. I wrote about this incident in The Great Wine Scam.

During the very long wait for the inheritances of the three de Clare sisters to be confirmed, due to their sister-in-law’s record-breaking pregnancy, Hugh got a little fed up of what he saw as undue prevarication. Just before 20th May 1315, in what was probably an attempt at a protest against the injustice he and some friends took Tonbridge castle, one of the properties under dispute. By all accounts, no blood was spilled in his seizure of the place, although Edward II was understandably not very happy at his nephew-in-law’s actions. He ordered the escheator to take the castle back in royal hands but the escheator, John Abel, was unable to do so: his hands were forcibly removed from the wicket gate and then the drawbridge was pulled up, barring him further entry. It seems that Hugh and his friends left of their own accord in 23rd May 1315, the point having been made. Hugh was not punished for this misdeed, but the men with him had their lands and goods distrained until they appeared before the king.

Sadly all that now exists of this once fine castle is a flattened mound and a dry moat situated on private land. It was originally built as a hunting lodge for King John in 1207 and became Hugh the younger’s through his wife’s inheritance of part of the De Clare estates after her brother’s death at Bannockburn. During the Despenser War it was attacked and damaged but was later repaired at great expense not by Hugh, but by the king. As well as the repairs, a new perimeter wall, drawbridge and hall were built using royal carpenters and masons. Hugh and Edward stayed at Hanley in early January 1324, probably to oversee the building works. Why Hanley was singled out for such lavish work is not known but I suspect it was a location favoured by Hugh and Eleanor as it was close to his hunting ground of Malvern Chase and Forest. The building work continued up until Hugh’s execution, with a chapel about to be constructed. After being released from her imprisonment in the Tower in 1328, Eleanor Despenser retired to Hanley until her abduction and marriage by William de la Zouche.

Goodrich was appropriated in 1325 in a what was probably a rather dishonourable way. It had originally been part of the estate of Aymer de Valence, earl of Pembroke, but when he died abroad in 1324, it passed to Elizabeth Comyn, along with a few other properties. As an unmarried heiress, she therefore became a ward of the crown and was lodged at Kennington, a royal manor in the keeping of Hugh Despenser the elder. Many rumours have surrounded this wardship (or, as some have suggested, imprisonment) such as she was betrothed to one of Hugh Despenser the younger’s sons (there are no records of this or of any annulments) and that she was badly treated and eventually coerced to give three properties away to the Despensers. She certainly claimed the latter once the Despensers were dead and put in a claim to have those properties returned to her. It is difficult to know exactly what happened, but Hugh the younger ended up with Goodrich Castle, an important fortress that stood on the Welsh Marches and at the gateway to his lands in south Wales. For more on this episode see this post, and the following one about Elizabeth Comyn.

This is the first castle that Edward II and Hugh Despenser the younger reached on their flight from Isabella and Mortimer in 1326. Although it had very strong defences, they decided not to stay, instead setting sail from the river port instead. Their intended destination is unknown but could have been Lundy Island, owned by Hugh – or it could have been Ireland where maybe Edward was hoping to raise some support against the coup. Either way they didn’t get very far because of bad weather and were forced to dock again at Cardiff.

After the death of Gilbert de Clare at Bannockburn, his lands were split between his three sisters. However for a while there was uncertainty over whether his widow was pregnant with his son (which would have been an extraordinarily long pregnancy!). In the meantime, these lands were given to custodians to look after. The man in charge of Glamorgan and Gwent was Payn de Turbeville, who exacted swingeing taxes on the population there, despite there being a famine. The people rebelled, led by the lord of Senghenydd, Llywelyn Bren, who burned Caerphilly to the ground and captured the castle’s constable before going on to ravage the whole of Glamorgan. Of course Edward sent an army against him, led by Humphrey de Bohun. He and Roger Mortimer took Bren’s surrender and petitioned Edward that he be spared his life.Bren and his family were subsequently locked in the Tower.

In late 1317 Hugh Despenser finally took delivery of his lands in Glamorgan but it seems he hadn’t forgotten the rebellion. In 1318, despite the king’s promise, Hugh took Bren from the Tower and brought him to Cardiff castle, where he had him hung drawn and quartered for treason. Whether Edward knew anything of this in advance can’t be known but it is notable that Despenser did not suffer any penalties for his action from the king. It did, however, have an effect on many of his Welsh tenants, for Welsh support for his cause was in very short supply in 1326.

An imposing and strong fortress, one of the strongest in the land, Caerphilly became Hugh Despenser’s through the inheritance of his wife, Eleanor.  In the years following Hugh’s return to court after his exile in 1321/22, he spent a vast amount of money improving the castle and creating a grander Great Hall. Unfortunately it was only finished just as Edward II’s estranged queen and Roger Mortimer invaded the country and so he never really had time to enjoy it, although he and the king fled there as Isabella advanced westwards with an ever-growing army.

When Hugh and Edward left Caerphilly to travel to Neath Abbey to negotiate terms for their surrender, Hugh left his eldest son, Hugh III behind in the care of Sir John Felton, commander of the garrison. He must have thought the lad would be safe enough there until either good terms of surrender could be made or with an army at his back. Of course, it never happened: through a series of mishaps and betrayal, Hugh and Edward were captured at Pant-Y-Brad and so the youngest Hugh and the men defending the castle were subjected to a siege by the forces of Mortimer and Queen Isabella. The castle held out for four months before it was concluded that a surrender was the only way forward for either side. However Felton refused to surrender unless the life of the youngest Hugh was guaranteed. Happily it was agreed and the castle was taken into royal hands. Although his life was spared, unlike his father and grandfather, Hugh was still imprisoned for the next five years.

Llantrisant is a rather small castle near Neath, and probably one that Hugh the younger had not had much business with, despite it being part of his lands. However, after his capture with the king nearby on November 16th 1326, it was the last castle he was to stay in. It must have been humiliating to be taken as a prisoner, probably bound and beaten, through the gateway of his own castle. He was not to stay there long, however, as he was soon on his way to his place of execution: Hereford.